If dealing with a port fitting, the first step towards thread identification is to determine whether the thread is parallel or tapered. Parallel means the thread walls are straight; while tapered means the thread walls, if continued lengthwise, would eventually meet. A seal must be used for all parallel fittings in port application, with the exception of Cutting Face fittings, however these are fairly rare. It is important to note that BSPT (British Standard Pipe – Tapered) can seal into a parallel BSP port, and Metric Tapered threads are capable of sealing into a parallel Metric port.

This first step will help you eliminate a number of possible thread types, as well as possibly reveal the method of sealing. For a parallel thread in port application, the fitting will usually seal at the top of the thread by means of an O-ring or seal. With a tapered thread, the fitting typically seals via metal-to-metal wedging of the threads. A thread sealant is applied prior to installation to reduce instances of leakage on tapered threads.

The ability to properly identify seats, chamfers, and their corresponding angles can also be a benefit to overall fitting identification. Flared seats refer to the protruding “nose cone” on a male thread, but also the corresponding inverted flare in a female thread. Chamfer is a term assigned to the internally bevelled sealing surface inside of a male thread, which mates with a female cone seat and is typically angled at 30°/60°. Please note the language is interchangeable i.e. Chamfers can also be referred to as Inverted Flared Seats and vice versa.

Ball seats however refer to the spherical sealing surface inside a female thread (swivel only) that seals with the chamfer on the inside of a male thread. These sealing systems all share a common trait in that there is a metal-to-metal seal created where the male and female surfaces contact (not including the threads). 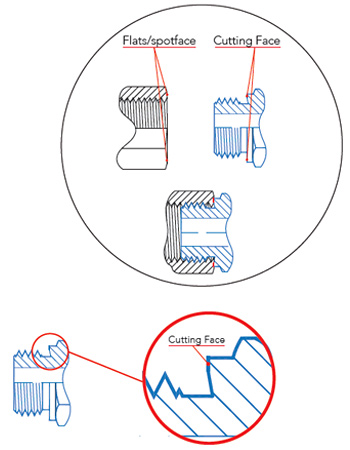 One of the rarer methods of sealing a fitting in port is Metal to Metal Sealing, also known as Cutting Face or Type B. This design creates a seal by means of a sharp “cutting face” at the base of the male thread that cuts into the flats or “spotface” surrounding the port when the fitting is threaded and tightened.

Cutting Face Type B is available in BSPP (ISO 1179-4) and Metric (ISO 9974- 3), although it is commonly mis-identified as regular BSPP or Metric port fitting with the seal missing. Look for a raised outer section on the male fitting where the bonded washer or seal would go; if it exists this indicates the fitting is Cutting Face.

DIN fittings have a 24° tapered throat angle that exists inside the male threads. To achieve a tube connection, a tube nut is tightened over the metric threads (hardened pre-assembly fitting bodies are recommended for installation) forcing a ferrule or cutting ring to grip the tube. By having the nut securely fastened to the tube fitting, both compress the cutting ring which holds the assembly in place and creates a seal. This sealing style also includes Kobelco fittings which are essentially an L-series Metric thread with a 1.5mm thread pitch in all sizes.

The angle sealing surfaces on fittings can be used to aid in fitting identification. There are a few ways to identify this angle, such as by means of angle gauge or by profile projector.