How to ID British Threads & Fittings

British Standard Pipe fittings are among the most popular of all foreign threads in the world today. These threads come in two versions: parallel (BSPP), and tapered (BSPT). The thread flank angle for both tapered and parallel British threads is 55°. Although BSP is a foreign thread, it isn’t actually metric. This is why it comes in Imperial sizes: 1/8, 1/4, 1/2, 3/4, etc.

BSP parallel (BSPP) threads commonly seal via a 30° chamfer on the male thread to a 30° cone seat inside the female thread (swivel only). If it is a port application, an O-ring and washer, Elastomeric seal or a bonded washer are needed to achieve a proper seal for parallel threads. For tapered BSP threads (BSPT), a seal is accomplished via thread wedging with additional support from thread dope or tape. As previously mentioned, it is possible for a male BSPT (tapered) to thread into a female BSPP (parallel), so long as the female thread is fixed and not swivel (this is because the recessed cone seat could interfere with clearance). To identify a BSPP fitting complete the following steps:

Use the diagram to your right to confirm what type of British fitting you have. Use caution as “multi-purpose fittings” exist that accommodate 2 or more sealing styles in one fitting (such as Adaptall’s 9005ES series that can be used for BSPP port or swivel connection). 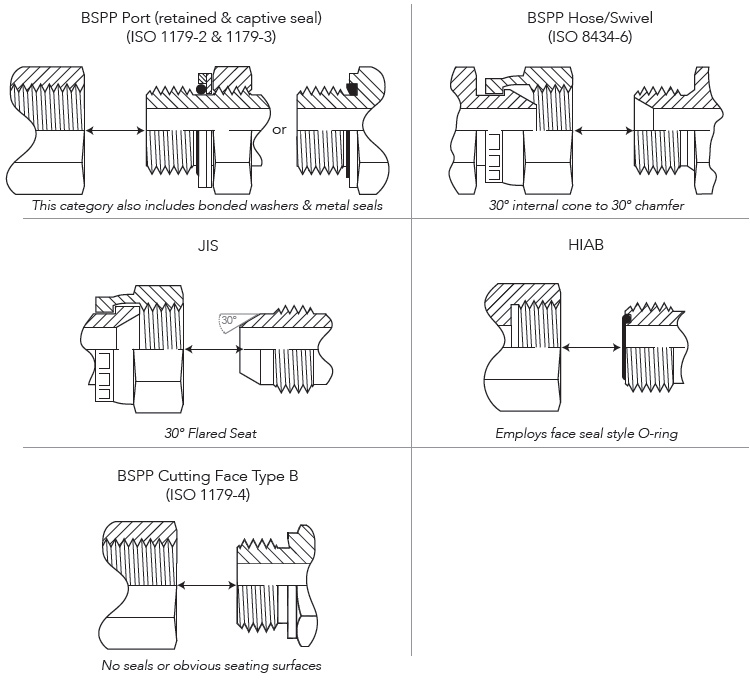 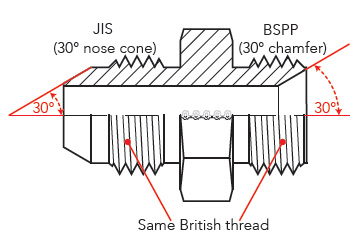 Japanese (JIS) tapered and parallel fittings are identical to British standard pipe threads, and are therefore considered to be in the ‘British Fitting’ group. The only difference is that parallel JIS threads have a 30° cone seat on the male end, and a 30° flared seat on the female ends. JIS tapered threads are identical to BSPT threads. Please refer to the BSPP and BSPT thread charts above for details. 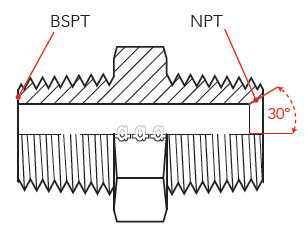 For British tapered threads (BSPT) caution should be taken as the most common tapered fitting in North America is NPT. The easiest way to distinguish any tapered fitting type from NPT is to verify if a chamfered sealing surface exists. If it does the fitting is most likely NPT. If not, it is either BSPT or Metric Taper (Metric Taper is far less common).

To verify the thread is BSPT, you would undergo the same steps as for a parallel British thread. First, verify the number of threads per inch. Second, measure the O.D. at the 3-4th thread from the end of the fitting. You can cross-reference your measurements to the following chart in order to verify the fitting is BSPT. 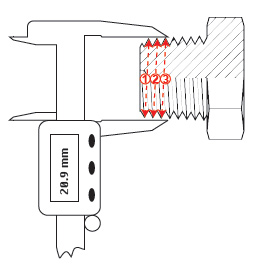 NOTE: It is a fairly common mistake to identify a BSPT (tapered) as an NPT. Always remember that NPT fittings have a 30° chamfered sealing surface while BSPT do not. Always use a thread gauge to be certain.